Mankichi Watanabe’s tea garden is in such a fabulous environment that it’s tempting to call it a little paradise. Nestled between woods and groves, the tea garden does not border any other agricultural areas or tea gardens. Instead it sits in splendid isolation, with the individual fields making a patchwork pattern amongst the trees. Mankichi Watanabe’s tea garden is in the middle of nowhere on Yakushima Island, around 140 km south of Kagoshima-city and is totally unique.

Ms. Goto, a good friend and associate of Watanabe’s tea garden first came across the topic of organic farming through reading a book, and after more research convinced Mankichi Watanabe in the 1990s to convert the whole tea garden to organic agricultural practice. Thanks to the perfect natural environment surrounding the tea garden with trees, clear water and clean air, along with diverse flora and fauna that could be seen as showpiece for ecological balance, the conversion to organic agriculture for Mankichi Watanabe was quite uncomplicated compared to the experiences of other tea gardens.

Today, Mankichi Watanabe’s organic tea garden is very harmoniously integrated into the overall picture of Yakushima Island, which has large nature conservation areas. Although Yakushima island is not well known for tea (there are only a few tea gardens) and tea fans are not typical visitors, tourists travel from very far afield to visit the thousand year old cedar trees and admire the island’s natural beauty. One of the reasons that the island is not known for producing tea is that although the growing conditions are perfect (high humidity, mineral rich soil), there is only one narrow strip of land of land between the sea and the high mountains where it is possible to grow tea. In fact on many parts of Yakushima there is no land that is flat enough to grow tea; the slopes of the steep mountains simply disappear into the sea. 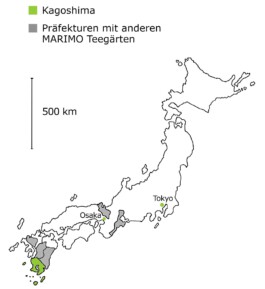 The island of Yakushima

The middle of the island is made up of several volcanoes, the highest of which is a volcanic crater called “Miyanoura-Dake”. Although the island of Yakushima is around 140km away from the main island Kyushu, at more than 1900m above sea level Miyanoura-Dake it is the highest place in the region of Kyushu. From the middle of Yakushima Island until the “turtle beach” of Nagata there is an extensive national park. The island is also home of multitudinous kinds of animals and plants, not to mention what are probably the oldest cedar trees of the world (the oldest ones are estimated to be around 7000 years old). Yakushima Island was declared a UNESCO World Heritage Site in the year 1993. 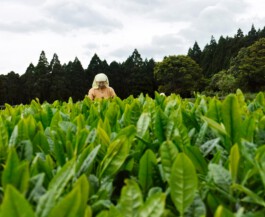 Just like the other organic tea farmers we know, Mankichi Watanabe cares for the bio diversity in his tea garden, especially with regard to tea farming. To help reach the goal of achieving bio diversity, he planted many different tea bush varieties e.g. Asatsuyu and Sae Midori, which are very rare varieties in organic tea farms. Other rare tea bush varieties to be found in Mankichi Watanabe’s tea garden include Kuritawase tea bushes. Although the variety Yabukita, which can be found in nearly every conventional Japanese tea garden is also present in Mankichi Watanabe’s garden, and indeed Yabukita bushes are said to make around 70-80% of the total volume of tea plants in Japan, in this special tea garden the Yabukita bushes play a less significant role. In addition the above mentioned tea bush varieties, the Watanabe family also include Yutaka Midori and Kanaya Midori tea bushes in their wide range.

Mankichi Watanabe also attaches great importance to diversity in the types of teas he makes. He works with tea bushes in unshaded cultivation [kabuse saibai] as well with tea bushes in shaded culitivation [kabuse saibai]. Besides this, Mankichi Watanabe works with many different methods of tea production. The small family owned tea production site that is only a five minute walk away from the tea garden is an important tool for Mankichi Watanabe to be able to carry out his broad spectrum of ideas for producing different varieties of tea. Thanks to the proximity of the production site to the tea garden, the freshly picked green tea leaves can be steamed without losing much time, which would cause little marks of fermentation on the leaves, which should stay as green and pure as possible.

While the steaming facility for the green tea production is naturally one of the key points in the process, all the other steps, right up until the final finishing can also be made directly at the production site. During the final production the sorting machine is just as important as the facility for final heating. Mankichi Watanabe’s organic green tea assortment therefore includes a broad range of green teas, including Shincha, Sencha, Kabusecha and Kukicha. It also includes Genmaicha, for which the Watanabe family buys unroasted rice from mainland Kyushu and roasts it on their on site. This lends the typical Watanabe character not only into the green tea leaves, but also to the taste of the roasted rice. This is the only tea garden family we know that carries out the rice roasting process by themselves.

During our visit to the Watanabe family at the beginning of April 2015, Mankichi Watanabe casually mentioned that besides organic green tea he also produces organic black tea. Hearing this, our guests immediately wanted to see and taste Mankichi Watanabe’s black tea. He kindly made some for us and while we tasted the tea we were able to ask him about the production process. Tasting Mankichi Watanabe’s black tea was astonishing, especially as the infusion time was just as short as we know it to be for very fine Japanese greens teas, and not only one infusion showed up with an excellent taste, flavour and colour, but it was good through two, three infusions. For his black tea, Mankichi Watanabe uses the tea bush variety Kanaya Midori, which is a Japanese tea bush variety that is usually used for green tea. The use of the variety Kanaya Midori, which does not exist in other tea production countries, is the first characteristic that makes the Kanaya Midori Koucha (black tea) so extraordinary and different from black teas from other countries.

The vegetation cycle of Kanaya Midori tea bushes is quite late, which means that the bushes begin to sprout later, and consequently it is harvested later. This is in contrast to tea bush varieties like Yutaka Midori or Kuritawase, where the sprouts start to shoot extremely early. Due to later sprouting, the leaves of Kanaya Midori bushes are usually harvested later; they therefore receive more intense sunlight than the leaves of most other tea bush varieties. Furthermore, Mankichi Watanabe does not only use the leaves from first flush for his Kanaya Midori Koucha, but also some leaves of later pickings, which have received even more sunlight. While Japanese green tea bush varieties tend to be quite soft in taste (meaning not too astringent), for black tea production the leaves need to contain enough Catechins for the tea to reveal a nice floral after the leaves have oxidized. It is just as important not to harvest the leaves too early, when the sunlight is too weak for the plants to produce enough Catechins.

For the black tea production process Mankichi Watanabe has to roll the tea leaves using the kneading machine that he also uses for green tea production. While the leaves for green tea are steamed before rolling, the leaves for black tea production should still be in their raw state. The rolling process breaks down the structure of the raw leaves, which is important for the fermentation process (a special kind of oxidations process). Finally – and this is the art - to do it at the right moment – the leaves have to be heated, in order to stop the fermentation process. Before Mankichi Watanabe releases his black tea [koucha] to be sold to his customers he insists on storing it for around two years. Only after this storage time will the Watanabe Koucha have developed its typical fruity, light and fresh flavour. It may sound curious, but it is the storage time that gives the taste of the tea a fruity depth of character whilst still tasting fresh and light (thanks to the use of Kanaya Midori bushes). The result of this special and somewhat unusual production process is an inspiring black tea, which is seen by Mankichi Watanabe to be his unique special treasure! 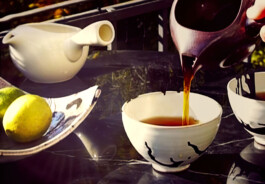